This is a commercial break kind of blog where I promise not to talk about psychology.  The place called home this month is a little room in a shared apartment in East Harlem, also known as 'Spanish Harlem'.  This was chosen as it's not way too expensive but apparently it's not 'the ghetto'.

This is a vibrant place and to begin with it was a fair old culture shock compared to white, middle class Brighton.

Strangely, I don't notice anymore.  It's amazing how quickly it just becomes life as we know it.  But for your entertainment, here are the first nine things I noticed in my culture shock...

1.  Music is everywhere.  People hanging on the street, on stalls, on the subway (img_subway).
In the park....

Also, people are carrying their music with them and playing it nice and loud - whether walking, selling corn cobs or sweeping rubbish. It's good music, especially in Harlem; a bit of reggae, a bit of samba, a blast of Stevie Wonder.  In Brighty it is only the very eccentric gentlemen of Hove who rides his mobility scooter (laden with crazy stuffed toy decorations) who does this.  He is the only one.

2. White people do not live in East Harlem.  I am an alien.  There are only Hispanic and Black people.  Getting on the subway at 116th to go downtown, it is marked that the White people only get on at 96th.  Everyone looks green on the subway - but you know what I mean.

3.  People stand around.  People just stand and hang out. They just stand on a corner and look about enjoying the scene. Often with (see #1) their music for company.  We would be far too self-conscious to do this.  It's also November and it's cold.

4. Poverty is everywhere.  So much so in East Harlem.. but also in pockets elsewhere.  It is especially shocking so near to the wealthiest places in the world 20 blocks away. There are 3 soup kitchens near me, many pawnbrokers, people sleeping rough and oh, a methadone clinic around the corner.

5. Indomitable spirit.  There is an approach 'if we fall we will rise again stronger'.  This seems an unspoken philosophy.  Some New Yorkers have looked crestfallen at the timing of my visit, shaking their heads apologetically and saying 'We are normally so positive and smiling in this city but we are all so fearful now'.  Yet there is no sense of giving up.  NYC will always celebrate diversity and the belief in equality and justice.  Thousands of post-it notes in Union Square subway are testimony.

6. Mid-town is a different culture entirely.  Ladies dressed head to toe in Chanel...oh is that Madonna's apartment? Or Lady Gaga? And being trampled by professional dog walkers wielding 8 pampered poodles at a time.

7. You can do ANY exercise you imagine.  Being different and unique is acceptable.  A candle lit spin class whilst listening to spiritual affirmations? Yes, it's a franchise.  You want to go to a class cycling underwater (4ft of salt water) no problem.  Pregnant?  That's okay, there are special underwater cycling classes for pregnant ladies with some calming prenatal yoga thrown in.

8. Sweaters in the oven.  People generally have apartments that are 3m by 2m, that's normal.  Maybe even a luxury.  In their apartments people don't cook.  There is no room for cooking and no room for sitting.  I heard of a girl who used her oven to store clothing, this is entirely normal.

9. Sunglasses on the subway even on a cloudy November day? Yes! 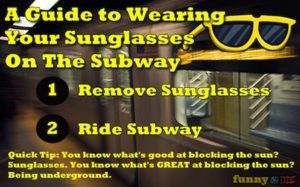 7 thoughts on “9 things I first noticed about NYC”